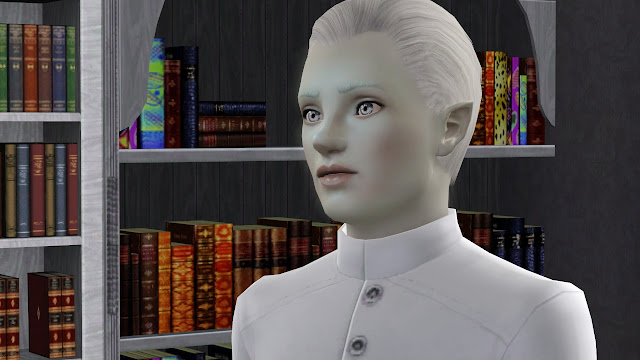 Status: Alive
Year Ascended: 1,700 of the Celestial Age
Realm/Claimed Territory: N/A
High Priest/ess: Minha Madere
Known Priests/esses: Lucas Madere,
Permanent Alliances: None
Magic: Specialized in balance and justice, Agonin is a very powerful magical source capable of digging into any type of magic if the need arises, but only if the need is there. His followers also have that gift.
Known Family: Alessandra Keeper (nee Madere); Caelia Madere (nee Remus); Sheogorath Keeper.

Agonin ascended to godhood in the year 1,743 of the Celestial Age. He is considered a rigid and strict being who adheres only to the law, but he's also known for his kindness and just ruling. After he had ascended to the status of God of Order, he met and married a woman named Caelia Remus who died giving birth to their daughter, Alessandra. Through his daughter's marriage to Majnun Keeper, the God of Madness and Magic, Agonin has one grandchild: Sheogorath Keeper. Agonin never married again.

Agonin has a relatively positive reputation amongst the populace and he is often looked to as a restorer of peace and balance. Agonin, while considered passive, has not been afraid to step in during times of crisis and swiftly end anything that upsets the balance of the world. When the balance of Atalan is not threatened Agonin often strives for peace and will not jump into wars easily. He is known for having many shelters that welcome in people from all walks of life to help and care for.

In godhood, Agonin Madere was elected Judge of the Gods, which is a title he holds proudly. He serves as judge at all Trials hosted by the gods (minus any where he would be the defendant) where he solves problems and maintains order.

Agonin is known for having the favor of the Sisters of Time due to his ability to remain neutral in almost all situations.

Despite having no permanent alliances, Agonin has a long-running "friendship" with Majnun Keeper - though neither will say so out loud.

Prior to rising, Agonin is most known for his restoration of the peace when the previous God of Magic and Madness, Zachurr Odaline, had run rampant with power. Agonin rose not long after Zachurr had started down a destructive path and he worked tirelessly until Zachurr was brought to justice and the new God of Magic and Madness rose to the task.

Stories Found In:
> Faction of the Lost Ones


*Spoilers Beyond this Point*

Faction of the Lost Ones Involvement:Agonin Madere is first introduced in 1.05: I'm Sorry, Ana where it is revealed that his name was Jack Demarco before rising to godhood and taking the name Agonin Madere (after Noe Madere, the previous God of Order who had taken him in and trained him). Jack was a farm hand on the Ademara estate in Monte Vista during the Celestial Age; in 1.08: The Game of Horseshoes we meet Jack's mother, Alysia, as well as discover that Jack was a product of rape.
Jack Demarco was raised alongside Soliana Ademara and as the two grew up they fell deeply in love. Jack had gone off into the heart of the Kingdom to win titles so he might earn Soliana's hand in marriage when he came back to discover she had disappeared off the face of the earth with no trace of her existence left whatsoever. After being tortured to the brink of death with scraps of information on Soliana left for the amusement of Zachurr, the God of Insanity, Jack was found by Noe Madere, the God of Order, and taken in, as revealed in 1.05 I'm Sorry, Ana.
In 1.10: Escape in the Night, it's confirmed in a letter to Agonin that Agonin is the killer of Zachurr Odaline, thus earning him the favor of "S," the former victim of Zachurr found in a magically sustained coma.
In 1.07: Lost Like Spoons, Agonin reveals that he would like to have a hand in helping the newly found victim of Zachurr's torture and begins by writing letters back and forth to "S." Unbeknownst to both of them, "S" is the Soliana from his childhood.